My daughter, Susan, started skating six years ago and showed...

My daughter, Susan, started skating six years ago and showed great potential. Her coach was expectant of a high level of accomplishment from her. However, the National Championships came, and although she was well rehearsed, her nerves got the better of her and she did poorly. The following year, when the Nationals arrived it was discovered that her entry form had been sent in two days late, so she could not participate. Still later, when she was approaching an important provincial championship that would qualify her for the Nationals, an accident on the ice disabled her. So once again she did not participate. On the fourth occasion, she had to withdraw because she was suffering with influenza.

Now, although Christian Science treatment had been requested for, and quick recoveries made from, all these problems, nevertheless, in skating circles, she earned herself a poor reputation as one dogged by misfortune, some hinting that it was brought on by fear of competing at the national level. 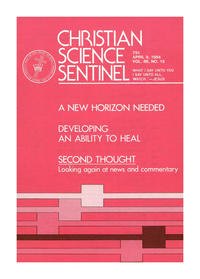