In an interview prior to the opening of a football season, a veteran running back was quoted as saying: "I don't think I can carry the load at 31 like I did at 26. My father and mother—I'm talking about Father Time and Mother Nature—are telling me I may not be able to handle that now."

Doesn't this statement raise a question that, because of its far-reaching implications, we all need to consider seriously—namely, whom have we adopted as man's Father-Mother?

Send a comment to the editors
NEXT IN THIS ISSUE
Article
What must I do? 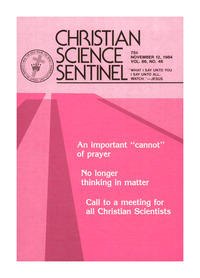