For about two years I struggled with an office situation that...

For about two years I struggled with an office situation that seemed most difficult and unfair. Because of cutbacks, the work normally done by two people had been assigned to me. This was supposed to be a temporary arrangement, and I found that by exerting extra effort, I could come up to the demands over a short period. But as time went on and the workload was not lessened, the pressure became enormous.

As each crisis arose, I prayed diligently with truths learned in Christian Science, genuinely longing to spiritualize my understanding of ability, strength, and justice. Yet always I slipped back into the pattern of trying to cope humanly with the problem. Finally, after a weekend of extreme nervous exhaustion, I returned to the office on Monday only to find the situation worse than ever. Without hesitation I told the president and the office at large that I was quitting, and I walked off. 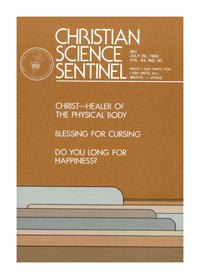