Do you collect darkness?

People collect and preserve the oddest things! Certainly one of the strangest must be darkness. About a year ago, following a total eclipse of the sun, seen in parts of the United States and Canada, an enterprising person was selling the darkness he claims to have canned during those moments when the earth lay in the moon's shadow. The cans were being sold as collectors' pieces. Would-be buyers were assured that the canned darkness would remain in good condition until at least 2017, when the next total eclipse is due in North America. And people were buying!

Amused by this report the other day, I began to think about the whole ridiculous notion and realized that I, too, might have stored away some darkness on my mental shelves: a hurtful remark made by another or, even worse, by me, which I had not forgotten; a past wrong I was not willing to forgive; a mistake I was ashamed of; an uncomforted grief; a personal antagonism not yet healed. Maybe you have collected some of these too. 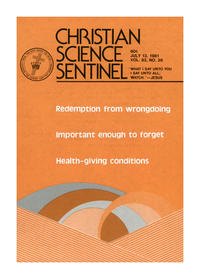