I first heard of Science during my last year in high school. A relative came to stay at our home, bringing his library of books. One day I picked up a book at random and it turned out to be Science and Health by Mrs. Eddy. After reading a few pages, I was eager to read more. Its explanation of God as infinite Spirit seemed more logical than what I had perceived Him to be, namely, a very large person out in space—one likely to deliver punishment. From time to time since early childhood, I had attended various churches and heard heaven and hell referred to as localities somewhere in the atmosphere. These images had left a lingering fear of what might happen to me. However, what Mrs. Eddy says of God and man in Science and Health immediately lifted my thought to the truth of spiritual being, giving me both peace and confidence.

Soon after my first reading of Science and Health I became acquainted with some neighbors who attended a Church of Christ, Scientist, and I began attending with them regularly. This precious teaching gave me strength to face the many challenges often confronting a young person.

Send a comment to the editors
NEXT IN THIS ISSUE
Testimony of Healing
Mrs. Eddy writes in Science and Health (p. 66), "Trials are proofs... 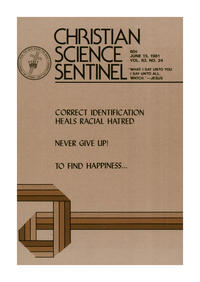