When your spouse is not a Christian Scientist

[Written for the Sentinel]

Christian Science came to me after I had been married for some years and already had small children. My husband and I had both been raised in a traditional religion. While neither of us was a zealous adherent, the thought of an actual change in religions had not occurred to either of us—that is, until I became interested in Christian Science.

Soon I was attending church services regularly and studying as-siduously. Gradually this Science became the major influence in my life, and I joined The Mother Church and a branch church. Although my husband did not object to my commitment to Christian Science or to rearing the children according to its teachings, he was simply not interested in it. 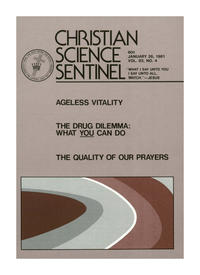