Fear of the unfamiliar sometimes leads people to label anything old as trustworthy and anything new as dangerous. It's not always a safe guideline!

Christianity was once new and bursting with the vital evidence of "God with us. " It introduced the world to the omnipotence of divine Love. Christian Science insists that this is still the nature of true Christianity! But as Mrs. Eddy once observed (The First Church of Christ, Scientist, and Miscellany, p. 148): "Bear in mind always that Christianity is not alone a gift, but that it is a growth Christward; it is not a creed or dogma,—a philosophical phantasm,—nor the opinions of a sect struggling to gain power over contending sects and scourging the sect in advance of it." 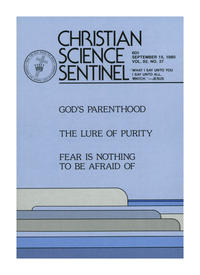