Can we prove God's existence?

Those who challenge the validity of religious experience sometimes argue that there is no way to verify the existence of a Supreme Being. Moreover, in a scientific age, when advancing technology and the pursuit of material comforts have supplanted religion in the lives of many, it might seem that there would be little interest or need to prove God's reality. Yet there are indications that religious experience is still valid and important to a large portion of the population. Just a few years ago, for example, a poll taken in the United States showed that nearly one third of the adults questioned had had "a religious or mystical experience, that is, a moment of sudden religious insight or awakening." Though only "sudden" experiences were asked for, the evidence convinced the veteran polltaker that "such an experience appears to have a profound effect on the outlook and direction of a person's life." George Gallup, quoted in The Times-Picayune (New Orleans, La.) December 9, 1976; 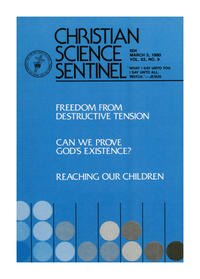