Shortly after my enrollment in a Christian Science Sunday...

Shortly after my enrollment in a Christian Science Sunday School, I became aware that the asthmatic attacks from which I frequently suffered were occurring less often and with less severity. Finally they ceased altogether. My mother told me that I had been healed, and that I should give God thanks. I was more inclined to discount the healing and accept the opinion of other family members who felt I had simply outgrown the disease.

However, several years later the asthma appeared again. At first I was very fearful, as I remembered the discomfort it had caused during much of my childhood. But by this time I had become an earnest student of Christian Science, and I turned naturally to the Bible and Science and Health by Mrs. Eddy, fully expecting to find the truth that would release me. On page 495 of Science and Health I read this statement: "When the illusion of sickness or sin tempts you, cling steadfastly to God and His idea. Allow nothing but His likeness to abide in your thought. Let neither fear nor doubt overshadow your clear sense and calm trust, that the recognition of life harmonious—as Life eternally is—can destroy any painful sense of, or belief in, that which Life is not. Let Christian Science, instead of corporeal sense, support your understanding of being, and this understanding will supplant error with Truth, replace mortality with immortality, and silence discord with harmony." That night I committed this passage to memory. 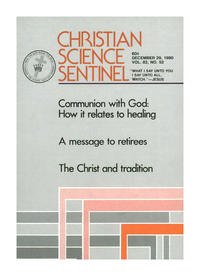