We can stay above the flood

Noah saw the flood before it happened.

He noted, one might say, the rapidly growing indulgence in material pleasures and expanding forms of wickedness that threatened to engulf mankind in total mental darkness. He discerned the swiftly diminishing role of spiritual values and the impending disappearance of allegiance to God, who is Life itself. Looking at his time, from a modern perspective, we might say he built the ark because he knew it was impossible for humanity to totally withdraw from God, and that a cataclysmic awakening to His presence was sure to come. Noah was led to safety, not because he got a special message from a god who helped some and abandoned others—God's wisdom and intelligence are available impartially to all every moment. He was saved because he kept himself awake to the demands of spiritual sense. The spiritual sense that maintained his obedience to God's law, in the midst of wholesale reliance on the false gods of materialism, lifted him above the floodwaters—before they rose. 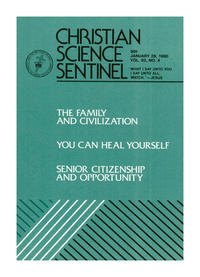