The growth that counts

Economic growth is everybody's concern. The general feeling seems to be that if only one's country has more of everything—oil, weapons, factories, food—all will be well. But this materialistic concept of growth can lead to greed and grabbiness—sometimes even to war. Fear of an energy shortage illustrates this fact.

Today voices are being heard that doubt the value and/or practicability of the growth ideology. After the Sixth European Planning Conference at Geneva last year, the United Nations office prepared a statement entitled "Planning of the European Social Development Programme, 1978-1981." Under the subtitle "Social Development Trends in Europe" we read: "Confidence in the regular and automatic expansions of national wealth and production has been shattered .... Significantly lower rates of material growth than originally envisaged have come to be accepted in most European countries. ..." 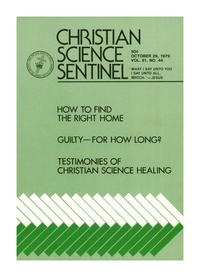