Some years ago I read several articles in the Christian Science...

Some years ago I read several articles in the Christian Science periodicals that related instances of mental surgery. I was very impressed, as I was then unfamiliar with this aspect of spiritual healing. But later I, too, was healed through mental surgery, after my index finger had become infected and swollen.

When I was confronted with this difficulty, I prayed, and these words from Science and Health by Mrs. Eddy comforted me (p. 463): "A spiritual idea has not a single element of error, and this truth removes properly whatever is offensive." However, two days later the condition appeared to worsen, and I called a Christian Science practitioner for help. During our talk, this verse from the Bible was quoted (Heb. 4:12): "The word of God is quick, and powerful, and sharper than any twoedged sword, piercing even to the dividing asunder of soul and spirit, and of the joints and marrow, and is a discerner of the thoughts and intents of the heart." I realized that whatever the trouble, one's consistent awareness of man's unity with God can bring a solution. 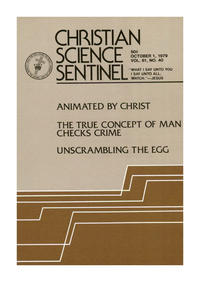