Government "of the people" is often described as the highest form of political order. It suggests full participation of the governed in decision-making processes that affect the public well-being. However, even in forms of government that provide a constitutional structure, safeguards for human rights, regular plebiscites, and a network of channels for citizen participation, those "in charge" are sometimes suspected of abuse of power—perhaps misappropriation of public funds or biased distribution of services.

Christian Science helps take the uncertainty out of the workings of government by bringing a metaphysical perspective to the concept of governance. It answers from a spiritual basis the questions: Who really governs? What is the relationship of the governor to the governed? 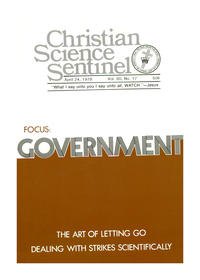