When a boxer expertly delivers "the ol' one-two," a cross jab followed by an uppercut, he often scores a knockout.

Christian Science brings about an even more devastating knockout of the common adversary, evil, through its own one-two punch—what Mrs. Eddy refers to in Science and Health as "the two cardinal points of Mind-healing." She says of Christ Jesus: "The 'man of sorrows' best understood the nothingness of material life and intelligence and the mighty actuality of all-inclusive God, good. These were the two cardinal points of Mind-healing, or Christian Science, which armed him with Love." Science and Health, p. 52; These two points—the nothingness of material life and the allness of God—are so basic to Christian Science that they are found in one form or another over and over again through out its textbook, Science and Health. 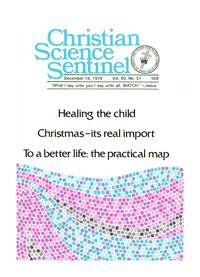