On Christmas morning 1971, as I was preparing a portion of...

On Christmas morning 1971, as I was preparing a portion of dinner for later in the day, I was suddenly overcome with a severe pain. I felt as though I were losing consciousness. Immediately this statement from Science and Health by Mrs. Eddy flashed into thought (p. 536): "The divine understanding reigns, is all, and there is no other consciousness." I quickly realized there is no mortal consciousness, because there is really only the consciousness of the allness of God, and man's perfect relationship to Him.

Gratefully I turned to resume my task but found that I could not hold an object in my hands or lift my arms. Fear swept over me. Later in the day we were to be dinner guests of people who were skeptical of Christian Science. The question of how I could meet the problem in time seemed overwhelming. This dynamic statement came instantly to me (Science and Health, p. 151): "Fear never stopped being and its action." The mesmerism of fear was broken! 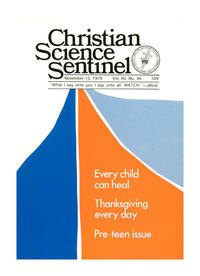