I have been a student of Christian Science for fifty years

I have been a student of Christian Science for fifty years.

An outstanding healing I had was of a broken wrist. The only reason I had it certified as a fracture was because of the insistence of my employer. The wrist was not put in a cast because, according to the doctor, a cast would be ineffectual. Two weeks had elapsed since the break. A dire result was predicted, which I did not accept but quietly denied. I was delighted with the doctor's decision not to put a cast on the wrist. I was having prayerful treatment by a Christian Science practitioner. In two and a half weeks I was back at my desk, using the typewriter as before, without any inconvenience whatsoever and without any bad effects from the incident. In fact, I had no difficulty performing my household duties during the healing process.

Send a comment to the editors
NEXT IN THIS ISSUE
Testimony of Healing
My testimony in The Christian Science Journal of January 1961... 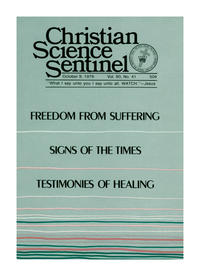