I am deeply grateful to God for the manifold blessings and healings...

Before being introduced to Christian Science I had been seriously ill for four months in 1974 and had consulted specialists for palpitation of the heart and gastritis. I was placed under a restricted diet. Various systems of medicine were of no avail. A Christian Scientist visited me twice. I requested him to pray. He said he would do so provided I gave up doctor and medicine. I refused because I thought my orthodox faith was sufficient to heal me. I even tried-fasting and prayer. Instead of becoming physically better, I became worse. Again the Christian Scientist visited me when I was preparing for admission to hospital, as my condition was serious. This time I accepted his offer of treatment in Christian Science. I asked my wife to throw out all the medicine. She did so. With scientific prayerful treatment, in a short while I got up from bed and smiled and said, "I am healed. I do not need medicine." All my family members thought at first I had become mad, as they did not see the miraculous healing I experienced. 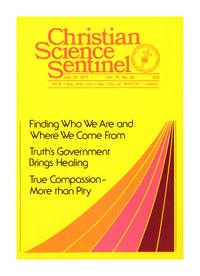