Some years ago I walked into a Christian Science church to find...

Some years ago I walked into a Christian Science church to find out exactly what went on there. I had reached a point of great indecision and doubt about organized religion and religious doctrine in general. And I had developed a most critical state of mind from past experience with other religious teachings. In this state of thought I approached Christian Science rather guardedly. But because I was determined to know all about it before deciding to "take it or leave it," I was willing to open my heart and mind to the study of it.

I have since had many opportunities to prove the genuineness of the teachings, and the irrefutable and demonstrable power of Mrs. Eddy's discovery, Christian Science. Many are the proofs I have seen in my life of the practicality of this revealed religion.

Send a comment to the editors
NEXT IN THIS ISSUE
Testimony of Healing
I have known Christian Science for years, and I feel that it is my... 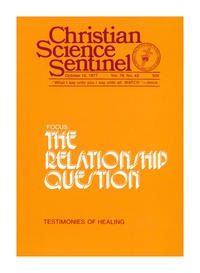