Emerging from the Outgrown

At one time we lived on a banana plantation. The snake population of that subtropical scrubland had discovered that a bunch of green bananas offered cool refuge from the heat. Unnoticed by the carters, the snakes were often brought into the packing shed still twined among the hands of fruit on the tall stems.

A carpet snake (considered nonvenomous) was brought into the shed one day. He was too big and his colors too variegated for him to escape notice; but as he seemed so scruffy-looking, torpid, and dull, we just put the bunch in a corner and forgot about him. Until, that is, we later saw him emerging from the shadows. By then he could hardly be recognized as the same snake. His lethargy was gone; he was resplendent in a new skin—or rather, in the skin revealed by his shedding the old one; his colors were jewel-bright and exquisitely patterned. 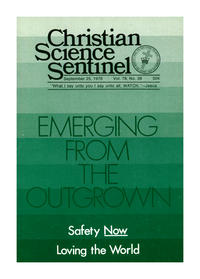