In 1972 I spent the summer months earning money for my...

In 1972 I spent the summer months earning money for my next fall's college tuition. Through a friend I was able to obtain a job in a cement factory in a nearby industrial community. The work was very challenging for two reasons. First, the labor was almost entirely manual and consisted of lifting bags of cement and various other building materials, which weighed up to 100 pounds. The challenge was increased by the fact that the workday was rarely less than twelve or fourteen hours long. This proved to be a very exhausting experience. Second, the majority of the work force was comprised of laborers who spoke little or no English. My college major had been Spanish, so technically I was not at a language loss; yet there was not a free and friendly communication between us. There was obvious opposition, which I knew must be resolved and healed.

One morning, while I was wheeling a load of cement onto a truck, my foot slipped, taking my balance with it. As I fell to the truck's floor, a good portion of the weight of this cement came down on me, pinning one leg (to the waist) beneath it. As soon as the bags of material were removed from me, I was taken to a clinic where I was X-rayed. This was an insurance action, necessary for the protection of the company involved. Everyone feared that I had broken my leg, and at that time I could put no weight on it.

Send a comment to the editors
NEXT IN THIS ISSUE
Testimony of Healing
I have had many proofs of the healing power of Christian Science... 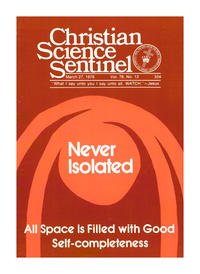