Christian Science has freed me from numerous illnesses

Christian Science has freed me from numerous illnesses. Before knowing this Science of spiritual healing, I suffered from a stomach ulcer. Medical treatment continued to be ineffective. Then I became acquainted with Christian Science, which healed me; but I remained very troubled until I understood that the healing power of Truth was restoring peace to me.

Then other ills manifested themselves; I was discouraged, and I put my confidence in medicine again. I suffered intensely. The surgeon decided to operate on me; he had discovered a cancer in the intestines. This operation was repeated three times. After the third operation, when the trouble appeared again, I was successively helped by two Christian Science practitioners, who treated me through scientific prayer. They reinforced my confidence in the divine All-power, making me understand the falsity of any material power. I was healed. Since then I have abandoned all medical treatment and have never ceased to put my confidence in divine Truth, God. This was more than ten years ago.

Send a comment to the editors
NEXT IN THIS ISSUE
Testimony of Healing
Last summer, while at a ranch in Colorado, I had an experience... 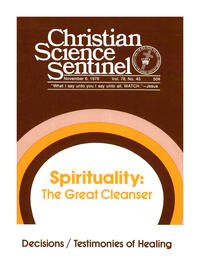