"Why is the moon broken?" the little three-year-old asked her mother. The mother was at first puzzled at this question and then realized that the child was looking at what she thought was only a piece of the moon, which was in its last quarter. The father listened with interest to the explanation that followed. The moon was not really broken, the mother explained, but only appeared to be because part of it was hidden by the shadow of the earth. It was really whole all of the time as could be seen when the earth moved out of the way, allowing the sun to shine on the full moon. This was a natural question for a child to ask, because she saw something that was apparently not whole or complete. Her mother's answer was the result of her more enlightened understanding.

What an excellent example of how an erroneous concept or picture can mislead us into believing something that isn't true! And how applicable this is to the belief that man is not whole or complete, that part of his identity is missing, that he is not well or happy. 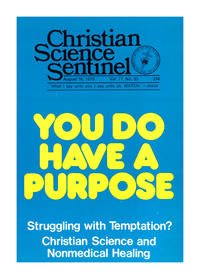