Spring Festival at the high school was to run three nights. Tonight was opening night, and Beth was excited. Just yesterday the whole cast had come in blue jeans and scrubbed the gym. The girls had made their own costumes and the boys had constructed the sets. Beth and her partner were to dance in six numbers, including the Merry Widow Waltz, the Waltz of the Flowers, and music from Kismet.

It was seven o'clock, and although the show didn't start until eight, she was anxious to get going. School was a block away. She was off, one arm draped with costumes and the other hanging on to her shoe bag and makeup kit. As she hurried up the last six of the school steps, she slipped and fell. Her ankle twisted, but despite the pain she managed to get to the gym before anyone saw her. She took time to pray as she had learned in the Christian Science Sunday School. Her first thought, as she turned to God, was her love for the cast and her responsibility to her partner. She couldn't spoil things for him. She quietly knew that her strength and ability to perform were God's responsibility. 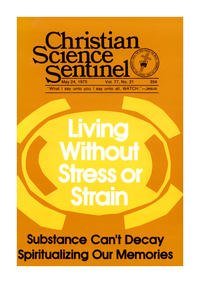