I was still newly interested in Christian Science when a challenging...

I was still newly interested in Christian Science when a challenging physical disease manifested itself and resulted in complications, including heart trouble and loss of weight. My family and close friends urged me to consult a physician, and I did. His diagnosis was a toxic thyroid condition requiring immediate surgery, with drugging the rest of my life.

I believed that this condition had been brought on by an emotional conflict while I was being influenced by human will. It followed logically that the wrong thought had to be eliminated— not a part of physicality removed—and replaced with the right spiritual ideas. Also, I understood enough from reading the textbooks of Christian Science, the King James Bible, and Science and Health by Mrs. Eddy, to know that I could be healed through spiritual regeneration and growth.

Send a comment to the editors
NEXT IN THIS ISSUE
Testimony of Healing
Toward the end of college, I began losing interest in Christian Science,... 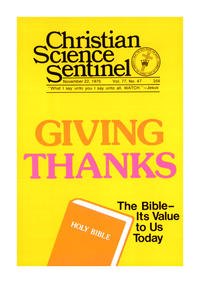