An Associate Editor of the periodicals since 1973, Mr. Barratt joined The Mother Church in 1951, received Primary class instruction in 1954, and became a Journal-listed practitioner in 1959. Following instruction in the Normal class of the Board of Education in 1967, he became a teacher of Christian Science. He has had broad experience in branch church work. He has been Sunday School superintendent, Second Reader, executive board member, and an advisor to several Christian Science college organizations. He is a graduate of Monash University in Melbourne, Australia, where he helped found a college organization. He becomes the first Editor of the periodicals from Australia.

Send a comment to the editors
NEXT IN THIS ISSUE
Testimony of Healing
The healing of my husband with the help of a Christian Science... 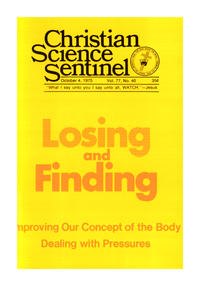