Related to the Lesson-Sermon for June 23, 1974, in the CHRISTIAN SCIENCE QUARTERLY Subject: Is the Universe, including Man, Evolved by Atomic Force?

Bands of lesser prophets who accompanied prominent figures such as Elisha were called "sons of the prophets," a term indicating their subordinate position. These bands or schools of prophecy may have been responsible in part for preserving the words and traditions of the prophets they served. 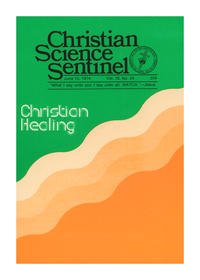