I had an unsightly skin disorder on my neck and the side...

I had an unsightly skin disorder on my neck and the side of my face. It caused me much discomfort and many sleepless nights. Each day I prayed as I have learned to in Christian Science, and at times asked a Christian Science practitioner for treatment. The condition would improve for a while but did not clear up. Several well-meaning friends and acquaintances suggested that I have medical help, but I was never tempted to do this because it was contrary to all my convictions that God is the true healer, and I wanted to rely on God as I had always done.

In the summer of 1972, I spent many hours in prayer and study of the Bible and Mrs. Eddy's writings because of a relationship problem. I was not aware of having done or said anything to cause this situation, but it seemed there was a barrier and no way to communicate. It became so disturbing to me that one day I became quite ill with what appeared to be an extreme case of shingles covering my entire body. Upon doing prayerful work day and night, I realized I need not react to evil in any form but did need to maintain a more spiritualized view of myself and others. 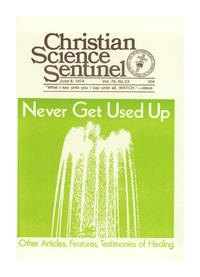