I first learned about Christian Science many years ago when I...

I first learned about Christian Science many years ago when I was a little girl. My father was having severe stomach trouble and could not eat food of any kind without extreme suffering. He had sought relief from many physicians and felt very discouraged.

One day a friend who knew about Father's suffering told him to go to the flour mill and ask the miller to grind a certain kind of grain. This, when cooked, would be food he could eat without harm to himself. When my father told the miller why he had come, the miller said he knew of something better; then he told Father about Christian Science. Father, who had always been religious and a believer in prayer, at once asked a practitioner for help. In a short time he was completely healed and able to eat all kinds of food without bad results.

Send a comment to the editors
NEXT IN THIS ISSUE
Testimony of Healing
Christian Science is becoming more and more a way of life to me... 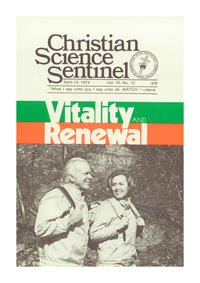