Healing Based on the Unity of Mind and Idea

The unity of Mind and its idea is central to Mrs. Eddy's revelation of Christian Science. It is basic to its demonstration. And the understanding of it genuinely comforts and surely heals. Possibilities are largely determined by our standpoint. If we should consider ourselves outside the infiniteness of Mind and idea, then Christian Science could seem abstract and difficult to demonstrate. But our work and demonstration is eased as we accept that our real being —and the actual being of all—is within the infinite reality of Mind and idea. "All that really exists," it was revealed to Mrs. Eddy, "is the divine Mind and its idea, and in this Mind the entire being is found harmonious and eternal." Science and Health, p. 151;

All human woe is traceable to the notion that God and man (Mind and idea) are apart. Or that idea, man, exists alone, with-out Mind or cause. Hence our unreserved realization of the oneness of Mind and its expression—and their actuality—is a potent healer. All trouble relates to a hypothetical reality outside divine Mind and its idea. We negate it by acknowledging that infinite Mind is never somewhere its idea is not. And the infinite idea is never somewhere that its cause is not. God and man are coexistent rather than juxtaposed, or set side by side. They are not separated by a border, so that one area is all Mind and the other all idea. The presence of one implies the presence of the other.

Send a comment to the editors
NEXT IN THIS ISSUE
Testimony of Healing
Christian Science was presented to me in October, 1955, by a... 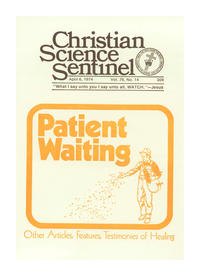