The Potency of a Spiritual Idea

The invention, development, and manufacture of the automobile has over decades changed the fabric of life to an astonishing degree. It's probable, as just one result, that we have a different attitude toward the beauties of the world of nature. The car has greatly extended our access to them. Millions now are directly exposed to ecological problems, even, perhaps, contributing to them. When the car was in its infancy, who could have foreseen its extraordinary far-reaching consequence?

But the consequences of spiritual ideas are even more far-reaching. They concern Spirit, God, and the creations of His unlimited self-consciousness, man and the universe. So potent are they that they're bringing about changes in human thought, the results of which are at present unimaginable. Mrs. Eddy perceived: "In the material world, thought has brought to light with great rapidity many useful wonders. With like activity have thought's swift pinions been rising towards the realm of the real, to the spiritual cause of those lower things which give impulse to inquiry. Belief in a material basis, from which may be deduced all rationality, is slowly yielding to the idea of a metaphysical basis, looking away from matter to Mind as the cause of every effect." Science and Health, p. 268;

Send a comment to the editors
NEXT IN THIS ISSUE
Testimony of Healing
My years of study of Christian Science have taught me to love... 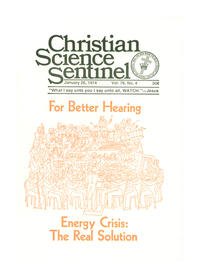