You can imagine my surprise—and dismay—when a musical friend of mine told me he had canceled his subscription to the concerts of a renowned symphony orchestra because of the "discord" he was hearing! What had happened? His ears had set up a resistance to modern music—or to contemporary music, to use a more exact term. He had fallen into what Nicolas Slonimsky calls the "non-acceptance of the unfamiliar." Lexicon of Musical Invective (New York: Coleman-Ross Co., 1953), p. 3;

I was well along in my study of musical composition before I knew anything of Christian Science. I had already learned the inexactness and approximation that enters into musical theory. According to the physics of sound, the basic octave is highly inaccurate. The tempered scale—or "tampered" scale—functions well enough because the human ear is not sufficiently sensitive to discern the physical inaccuracies of the system.

Send a comment to the editors
NEXT IN THIS ISSUE
Article
Art, Its Forms of Extended Experience 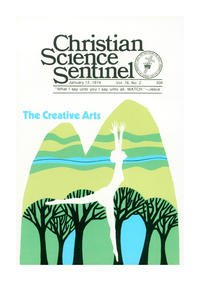