A television news-discussion program was about to begin on the East Coast of the United States, the first of a weekly, half-hour series. Three of the men adjusting their microphones and chatting easily back and forth were veteran performers, cool and relaxed. The fourth, however, was much younger, and relatively new to TV.

In the darkened studio, as the red "on air" light lit up on the camera facing him, the newcomer tried to hide his worry about keeping up with the others. He tried to round up his thoughts and search for an original opening line. He needed help. 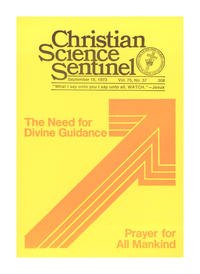