When a Child Questions God's Existence

When a young child begins to ask questions, he is likely to put everything to the test. "I don't believe in God," he may announce provocatively to his parents. Perhaps he heard someone say this at school. Perhaps he just wants to learn what it feels like to voice such a rebellious thought, or to find out what the reaction will be on the part of his mother and father who are, he knows, firm believers in God and insist that he go regularly to Sunday School.

And what will their reaction be? Horror? Arguments? A quiet but pained willingness to let him make his own decisions as to whether or not he believes in God? If it is the last, he will wonder just what to make of it. He knows that if at bedtime he had questioned the coming of sunrise in the morning, or if he had said he didn't believe there were such animals as giraffes because he hadn't ever seen one, he would have had a definite answer that the sun would certainly rise, and giraffes definitely do exist, and he had just better believe both of these facts because they happen to be true.

Send a comment to the editors
NEXT IN THIS ISSUE
Testimony of Healing
Twelve years ago we had our third child, a little girl we call... 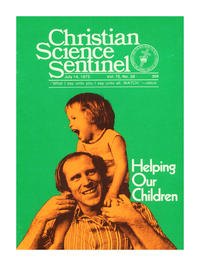