I attended Christian Science Sunday School with a friend many...

I attended Christian Science Sunday School with a friend many years ago. However, I lost interest, and it was not until a few years ago that I found my way back to the fold.

Some time ago I began to suffer with a skin problem. I was not then a student of Christian Science, and I visited a physician who gave me a prescription, but this very uncomfortable disease continued to spread and at times affected my entire skin surface. We moved from an eastern state to the Midwest of America. Although my husband and I had joined an orthodox church and our four children had attended the Sunday School, I felt I would visit various denominations in the new town before I made a decision concerning the one I would attend permanently. I knew immediately that I wished to belong to the branch Church of Christ, Scientist. I attended there, for I found much love and joy, and it was as though I had come home again.

Send a comment to the editors
NEXT IN THIS ISSUE
Testimony of Healing
In my eighty-ninth year, and after a half century of experience... 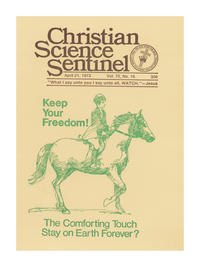