A labor dispute was settled with hardly anyone realizing what had happened. This resulted from a glimpse of the verity expressed in a statement from Science and Health by Mary Baker Eddy: "Understanding is a quality of God, a quality which separates Christian Science from supposition and makes Truth final."  Science and Health, p. 506;

During the great Depression I was a young employee of a giant chemical company. My superior in a nonunion plant where I had been newly assigned asked me to see what I could do about a labor dispute in one of the departments. There were hard feelings between the workers and the managers and supervisors. Labor complained of its immediate superior, the foreman of the department, and the foreman complained that labor was dragging its feet. The dispute had become so hot that labor was threatening physical violence and held rallies where the foreman was hung in effigy. 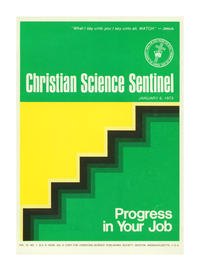