Putting Off the Misery Coat

Barbara's father had been transferred from Boston to Paris, France, so the whole family moved to this beautiful city. But Barbara wasn't a bit happy. She thought she had no friends, and her teacher was too strict, and she was lonely.

One day she came home from school and told her mother. Mother listened to her and then said a funny thing. "You know the old coat that hangs by the back door?" This coat was used when shaking the mop and putting out the garbage. It was called in French "le manteau de misère"—the misery coat. Barbara's mother told her, "You're letting self-pity into your thinking and putting on the misery coat." 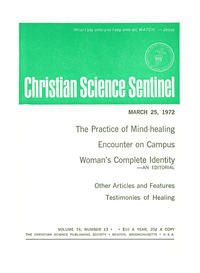