Heart is metaphorically regarded, in the Bible and elsewhere, as the source of one's intellect and activity. In Proverbs we read, "Out of [the heart] are the issues of life."Prov. 4:23; In Psalms: "The law of his God is in his heart." Ps. 37:31; And Solomon prayed for "an understanding heart." I Kings 3:9; Heart stands for the seat of our emotions, our basis of reasoning, the repository and directive center of thought, will, feeling, and conscience.

In Christian Science we learn that all physical effect has a mental cause, and that as a man "thinketh in his heart, so is he." Prov. 23:7; We read all too often that a man has suffered a heart attack, as if the heart attacked the man. But isn't it rather that the man attacks his heart by slow strangulation through a false sense that life is material and governed by material law? He believes he can hate, be fearful, be revengeful, indulge in myriad forms of mortal thinking and acting, and he reaps the difficulties his thought has sown. Are not these the things that can bind and entangle the heart until it falters in a greater or lesser degree? 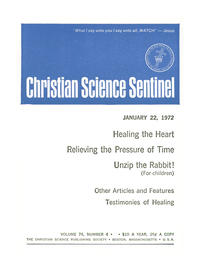