How does one begin to express sufficient gratitude for Christian Science?...

How does one begin to express sufficient gratitude for Christian Science? This beautiful and practical religion found me at a time of deep depression and frustration. In the final days of World War II, sick and discouraged, I literally cried out one day, "If there is a God, show me!" Our heavenly Father heard me that day. He was present with me, though I knew it not at the time.

Send a comment to the editors
NEXT IN THIS ISSUE
Testimony of Healing
To those leaning on the sustaining infinite, to-day is big with... 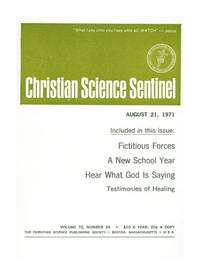