I came reluctantly into the study of Christian Science at first, but...

I came reluctantly into the study of Christian Science at first, but the exact logic of its teaching finally convinced me.

Up to this point doctors and medicine had played a large part in my life. At the time when I finally chose Christian Science and relinquished medicine, I was a frequent victim of increasingly severe bronchial colds. Prayer in Christian Science, sometimes with the help of a practitioner, often helped me over a particular phase and kept me on my feet, but I was disappointed that these attacks did not vanish. Looking back, I now realize that I was expecting physical healing while holding on to thoughts and practices that were contrary to the teachings of Christian Science. As I slowly learned to relinquish these, I won my physical freedom as well, and the attacks ceased.

Send a comment to the editors
NEXT IN THIS ISSUE
The Bible Speaks to You
RADIO PROGRAM NO. 433 - Retiring into New Activity 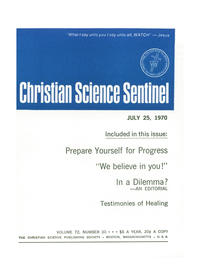