Christ Jesus had a consistently positive attitude of thought throughout his teaching ministry. He came to uplift, to regenerate, to heal. He taught men to appreciate good, to love their fellowmen, to magnify the good in everyone. He worshiped God, or good, and refused to bow down to error or evil in any form. Wherever he went, people were blessed and purified. His whole attitude was one of glorifying good and bringing freedom and healing to men. His final earthly act was ascension.

I once knew a man who had a consistently negative attitude toward life and his fellowmen. He would almost without exception find something to run down or criticize negatively. He would freely express his condemnation of the government of his country, he would find wrong motives for the company he worked for, he would suspect everyone he dealt with, and he even depreciated himself. His whole general attitude was to tear down and minimize. He ended up a suicide.

Send a comment to the editors
NEXT IN THIS ISSUE
Testimony of Healing
At the time our oldest son reached school age we had to acknowledge... 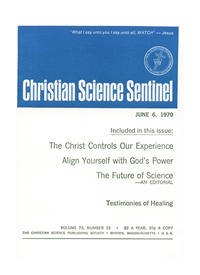