For nearly half a century the Christ, Truth, understood through...

Bessie Kushler with contributions from Clarence A. Kushler

For nearly half a century the Christ, Truth, understood through the teachings of Christian Science, has maintained, sustained, protected, and healed the members of my family and me in all manner of inharmonious situations and conditions. Two testimonies of healing have appeared in the Christian Science Sentinel during that period.

In Rudimental Divine Science Mrs. Eddy writes (p. 9), "The spiritual power of a scientific, right thought, without a direct effort, an audible or even a mental argument, has oftentimes healed inveterate diseases."

Send a comment to the editors
NEXT IN THIS ISSUE
Testimony of Healing
The most wonderful gift I have ever received is that of class... 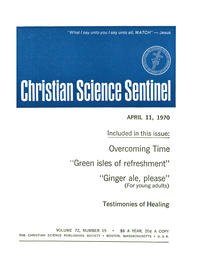