Joy can be claimed by each one of us as a constant fact of life if we heed the lessons Christ Jesus taught. The Master's resurrection and ascension were his final demonstration of divine law, which decrees that man is one with God as His expression, whole, upright, eternally blessed, and thus free from condemnation. Jesus intended his acts to show mankind in all ages that they are not burdened by the Adam curse, the claim that man is born a sinner and is henceforth under a mortal cloud of damnation. Each of us can, and in fact must, eventually rise above the mortal, material sense of existence.

The account beginning in the second chapter of Genesis of the appearing, the fall, and the condemnation of Adam and Eve is allegorical of the common erroneous belief in a discordant, material creation. Mary Baker Eddy, the Discoverer and Founder of Christian Science, declares in Science and Health with Key to the Scriptures: "Mortals are not fallen children of God. They never had a perfect state of being, which may subsequently be regained." Science and Health, p. 476; Christian Science makes it clear that man's only, true identity is forever spiritual, inseparable from God. The mortal is but evidence of ignorance of the spiritual fact. The first chapter of Genesis presents, symbolically, the true creation. Here man is revealed as made in God's image and likeness. This chapter significantly ends with God's own assessment of His unchangeable universe: "And God saw every thing that he had made, and, behold, it was very good." Gen. 1:31; 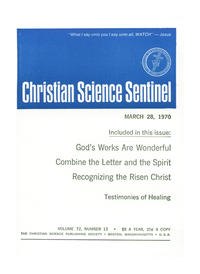