Most of us have been tempted at times to think, "I'm in such a hurry and have so much work to do! I don't know where to begin." The alert Christian Scientist knows what is needed. "There is a sense of pressure here," he says to himself. "I must do some prayerful work on it." What is the difference between these two concepts of "work"?

The former refers to human activity crowding in on the mortal who, hedged in by a sense of finiteness, believes he must physically accomplish certain duties within a limited period of time. He feels hurried, which, after all, is a belief that the doing depends on his own effort. 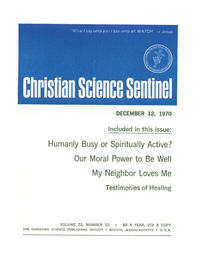