The words in this issue are related to the Lesson-Sermon in the CHRISTIAN SCIENCE QUARTERLY designated to be read in Christian Science churches on August 31, 1969.

Who, being in the form of God, thought it not robbery to be equal with God (Phil. 2:6)

The word translated "robbery" is used in Greek in two chief meanings, with a significant distinction between them. It can denote either "robbery" (including the sense of "rapacity, self-aggrandizement," etc.) or "a thing to be snatched" (that is, "plunder, prey, booty, prize"). Hence the variant renderings offered by modern translators. Goodspeed has, "Though he [Christ Jesus] possessed the nature of God, he did not grasp at equality with God"; while Weymouth translates: "From the beginning He had the nature of God. Yet He did not regard equality with God as something at which He should grasp." 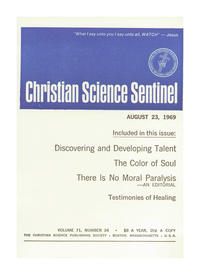