[The above is an abbreviated, postproduction text of the program released for broadcast the week of August 1-7 in the radio series, "The Bible Speaks to You." Heard internationally over more than 1,000 stations, the weekly programs are prepared and produced by the Christian Science Committee on Publication, 107 Falmouth Street, Boston, Massachusetts, U.S.A. 02115.]

RADIO PROGRAM NO. 383 - Release from Exhaustion

[The speaker is Harvey Wood. The questioner is Robert McKinnon.]

Questioner: People want to look forward eagerly and joyfully to each new day. But many men and women wake up each morning sighing, "Oh, another day!" And by evening, although they haven't overexerted themselves, they often have to fight extreme weariness. This exhaustion is sometimes referred to as psychological weariness. What do you think is behind it? 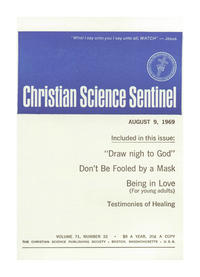