I attended a Sunday service in a Church of Christ, Scientist, with...

I attended a Sunday service in a Church of Christ, Scientist, with my mother when I was about seven years of age. Several years later I heard my first Christian Science lecture. The sermons I had listened to in the church attended by my family were to my young mind never fully finished. They seemed to lack something, but the lecture satisfied me; and after I started going to the Christian Science Sunday School in 1907, I soon found out what made the difference. It was the healing brought out in Christian Science. I learned that this religion is a practical one. Soon after we began attending the local Church of Christ, Scientist, I laid aside my eyeglasses.

One of my early healings was that of a very disagreeable throat condition I had had since childhood. One morning I decided that I had been in bondage to the trouble long enough, and I literally stamped my foot, saying to myself, "I am through being in bondage." I also dropped all fear. In about a week I realized that I was healed. There never has been any return of the condition.

Send a comment to the editors
NEXT IN THIS ISSUE
Testimony of Healing
Unceasing gratitude to God for the teachings of Christian Science... 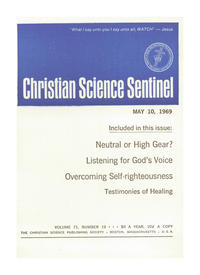