Scot was excited. He had not seen his family for seven months because he had been away at school. He knew that they were looking forward to seeing him and finding how he had grown up now that he had turned nine.

He began to pack his suitcase for the long trip, which would take him from Australia right through four airports to his island homeland near the middle of the South Pacific. He did not mind being alone on the journey. Nor was he at all afraid. He had done it all before, and he knew quite well that divine Love would stand ready to guard and guide him during every moment of his travels. 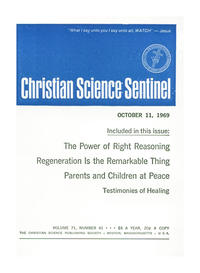