I want to share a demonstration of God's ever-presence I had...

I want to share a demonstration of God's ever-presence I had one Thanksgiving vacation. I am a pupil in the Christian Science Sunday School and am in the sixth grade. On a YMCA trip to Death Valley I lost my billfold in a sand dune while I was playing rough-and-tumble. Although my friends and I looked on as many dunes as we could before we had to leave, we did not find the wallet. It contained six dollars and my bicycle registration. I began to know that God is everywhere and all-seeing. I knew He would lead me.

The next day I arrived home, and my mother and I declared there was nothing lost in God's kingdom. With the Concordance to Science and Health by Mrs. Eddy, I studied the references on "find" and "found." I continued to trust in God's power. Three weeks later a knock came at our door. A stranger said, "I have found your billfold!" This man told us he was a photographer and had been taking pictures at Death Valley, when he noticed a small corner of something sticking out of the sand. He uncovered the billfold. Although he lived many miles from us, he took the time to return it to me. The interesting thing was that there had been heavy winds and rains during these three weeks, shifting and moving the sand in the desert.

Send a comment to the editors
NEXT IN THIS ISSUE
The Bible Speaks to You
RADIO PROGRAM NO. 335 - Man Is Not a Victim Of Chance 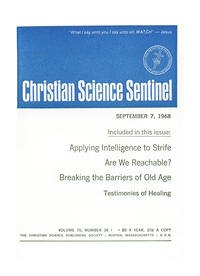