My introduction to Christian Science came when I married a...

My introduction to Christian Science came when I married a young man who had been raised according to its teachings. For several years we lived in a town where there was no church, and my interest was spasmodic. Later we moved to a larger city, where I began to attend a branch Church of Christ, Scientist, regularly.

When we were expecting our first child, we contacted a Christian Science practitioner, who agreed to help us through prayer at the time of the birth. We had consulted a physician who was in sympathy with the teachings of Christian Science. However, just before the baby was due to arrive, he told us that it was not in the normal position. He called in an experienced obstetrician, whom we had not met, to take his place. A long, difficult delivery was forecast.

Send a comment to the editors
NEXT IN THIS ISSUE
Testimony of Healing
"All things work together for good to them that love God" (Rom. 8:28) 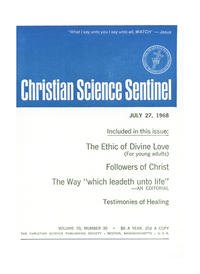