On one of the beaches of Britain, since the last war, a live mine is sometimes washed up, becoming a danger to bathers and boatmen and to children playing on the sands. In such an event, the police notify the nearest naval or military depot to send a squad of men to remove the fuse and explosive charge. While the mine may now appear just as forbidding as before the removal of the charge, it has actually been neutralized and rendered ineffective to harm anyone. 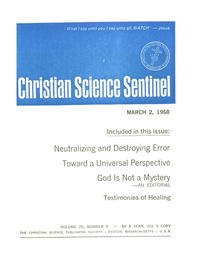